Nachbarschaftsakademie in Prinzessinnengarten is a self-organized open platform for urban and rural knowledge sharing, cultural practice and activism. It has its base in Prinzessinengärten, a community garden built in 2009 on a wasteland at Moritzplatz in Berlin’s Kreuzberg district. 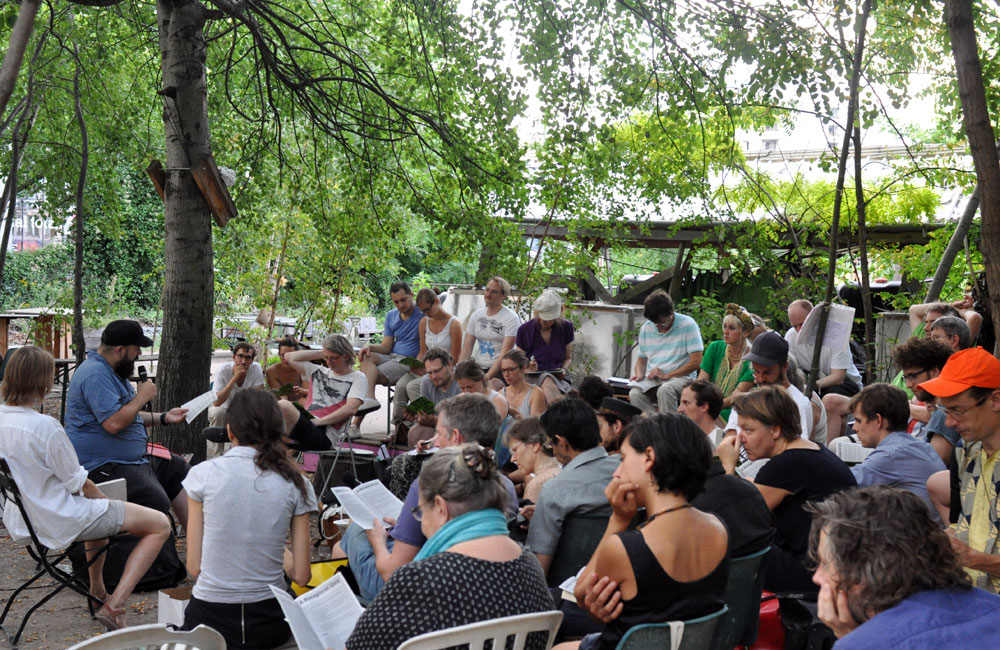 The Nachbarschaftsakademie (Neighbourhood Academy) was initiated as part of the community garden Prinzessinnengarten (Princess Garden), which was started by a group of activists to reclaim public land against privatization. The idea of the Academy lies in the bottom-up development of community-oriented practices. It is all about exchange on how to work on the issue of urban land, relationship between urban and the rural, right to the city, and ecological and social transformation.

The Nachbarschaftsakademie is a community-based platform that invites activists, artists, architects, researchers and representatives of initiatives working on questions of urban and rural resilience, commons, land-politics and social housing to work on local issues and exchange experiences and working tools through workshops, walks, interventions. “The Neighborhood Academy is a place free from admission. It does not give out certificates. It cares for experiences and knowledge made in self-organized urban and rural spaces, and it supports the growth of new perspectives and narratives. Its methods are as diverse as the people we wish to connect to: They range from community cooking, public talks and film screenings to workshops, artistic interventions and expert contributions. The Neighborhood Academy has not a set format. It is made through shared engagement.” [1]

In 2019, the Academy launched the program “Growing From the Ruins of Modernity” as part of the larger research and exhibition program “Licht Luft Scheiße – Perspectives on Ecology and Modernity” hosted by Botanischer Garten und Botanisches Museum der Freien Universität Berlin (BGBM), Martin-Elsaesser-Stiftung, Nachbarschaftsakademie [Neighbourhood Academy] in Prinzessinnengarten Kreuzberg and nGbK.

Experimenting with self-organised forms of learning

The program hosted events, a cinema program, workshops, installations, and a publication in the Prinzessinnengarten Kreuzberg. The program raised questions on the global ecological crisis and its social repercussions and the need for new forms of education. Which kind of future are we learning for – a future in which we share the responsibility for life on this planet or a future of accelerated destruction? In 2015 the Nachbarschaftsakademie began experimenting with self-organised forms of learning, between activism and art. In the summer of 2019, under the title “Growing From the Ruins of Modernity”, a curriculum for a permanent place of life-long learning will be developed – for the next 99 years – at the community garden in Kreuzberg. Learning, in our book, means contributing collectively and joyfully to forms of co-existence in which human beings and the biosphere are not exploited.

In the Autumn of 2016, the Nachbarschaftsakademie launched a meeting with a network of repair-initiatives in Berlin, bringing together grassroot non-profit organisations and groups to share knowledge, researching commons and/ or community repair.

The platform is a result of collaboration among several actors, with the participation of Åsa Sonjasdotter, a Swedish artist who has been working closely with the garden on biodiversity and the Anstiftung [2], a foundation that carries out research into commons, do-it-yourself and sustainable regionalisation. The Arbor (Die Laube) is a three-story building in Prinzessinnengarten that acts as the physical platform for Nachbarschaftsakademie [Neighbourhood Academy]. It’s a space for workshops, training and cultural events.

The non-profit association Common Grounds is responsible for running The Neighborhood Academy. It is supported by the organization Common Grounds eV. Prinzessinnengärten is a non-profit project initiated by Nomadisch Grün (Nomadic Green) in the summer of 2009 at Moritzplatz in Berlin Kreuzberg. In 2019, Nomadisch Grün (Nomadic Green) moved to new locations in a former graveyard in Hermannstrasse 99-105. Common Grounds eV. is since 2020 responsible for the activities at the Prinzessinnengärten by Moritzplatz.

The Neighborhood Academy was initiated by Marco Clausen (Prinzessinnengarten), Elizabeth Calderón Lüning (common grounds), Åsa Sonjasdotter and Anstiftung who has been running it until 2019. Currently the platform is run by interested members of the garden who use the platform for educational purposes.

This description is based on excerpts from nachbarschaftsakademie.org and input from Åsa Sonjasdotter.